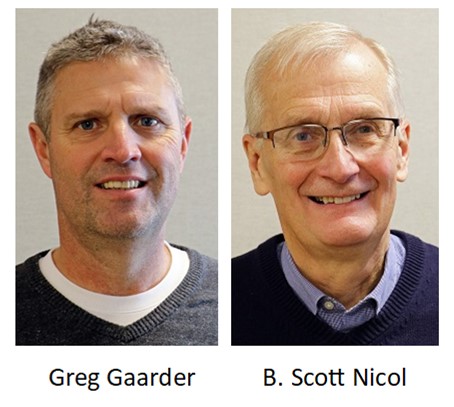 “We are in a very good position moving forward,” said Gaarder, who is the business manager of the Tomah Area School District and in his second, three-year term on the board replacing former hospital board chair Oak Moser of Tomah. “I think we have the right people in the right places, a beautiful new facility and are well positioned for the future,” Gaarder added.

“The only obstacles I think that are sitting out here for us are what’s the economy going to do in the future, where is health insurance going and when does COVID-19 end. All those things are going to be important,” Gaarder said.

Gaarder also said there would be much anticipation in filling the hospital’s CEO position held by Phil Stuart who recently announced his retirement effective later this year. “Phil will be missed and has done a great job. I don’t know where you begin to replace somebody like Phil, but certainly that person is out there and we will do our best as a board to find that person,” Gaarder said.

Nicol, a dentist at Tomah Family Dentistry, fills Moser’s vacancy on the board. Nicol said he is looking forward to “the opportunity to continue the quality care that is the tradition” of the facility. “It’s my desire to keep providing the best care to our community and surrounding area,” Nicol said. He previously served on the former Tomah Memorial Hospital board of directors from 1990-1996.

Moser, who wrapped up his second three-year term including the past three years as chair, said he has been grateful to be part of the organization, which has not had a normal operating year since moving to the new Tomah Health facility in 2019. “There have been many challenges, surprisingly though it is somewhat satisfying in that the level of care and services offered here and the superior health care provided to the community and the efforts people make. It’s just been phenomenal to be a part of it and I’m very gracious for that,” Moser said. “Everybody who works in this facility comes here every day using their strengths and skills, knowledge and experience and the effort is unbelievable,” Moser added.

Cavaness and Holness both serve on the hospital Medical Executive / Peer Review Committee, which meets monthly and oversees medical practices at Tomah Health.