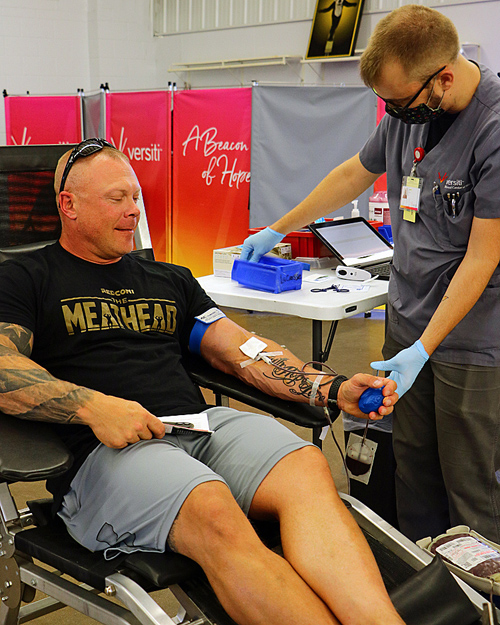 Nearly 300 lives will be saved as a result of blood donations made during the Versiti BloodCenter of Wisconsin / Tomah Health Blood drive held July 27 & 28.

Tomah resident Kevin Gregar was one of 109 donors that took part. Gregar said that besides the charitable part of the drive, he donates for his own health too. “It’s worth giving it a try because there are many more benefits than the second of discomfort. That’s really all it is,” Gregar said during his donation July 27. “It’s beneficial to me too, so it’s a win-win,” he said.

He also appreciated the fact that he is helping with the blood supply at Tomah Health. “It’s great to help locally. It’s an hour of your time and you do a lot of good,” Gregar said. Versiti is the sole supplier of blood to nearly 50 hospitals in Wisconsin including Tomah Health.

Versiti officials said 109 donors registered for the drive, which collected 100 blood products that will have the potential to save nearly 300 lives.

Versiti Blood Center account representative Emalea Cogdill said officials see an extra need for blood at this time of the year due to an increase in accidents during the summer. “While the supply is usually at its lowest, demand is at its highest,” she said. A single car accident victim can require as many as 100 units of blood.

The next Tomah Health / Versiti drive will be two-day event scheduled Sept. 22 & 23.