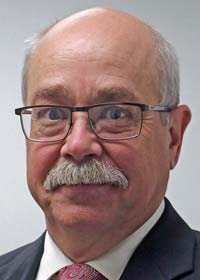 After five decades in health care, including 27 years at Tomah Memorial Hospital and Tomah Health, CEO Phil Stuart has announced his plans to retire.

In an announcement to the hospital board of directors Dec. 21, Stuart indicated that he would step down in June 2022. “It has been my honor and privilege to have been in this position for 27 years,” Stuart wrote to the board.

Stuart has served as CEO since arriving at Tomah Memorial Hospital in 1994.

“It is bittersweet as it feels like I am leaving at a time when healthcare and Tomah Health, are faced with very significant challenges,” Stuart added. “I am confident that the team is well positioned to handle whatever comes their way.”

Stuart said that his plan to retire has been in the works for several months. “If the transition to a new CEO takes longer than anticipated, I will be available to ensure a solid handoff,” Stuart added.

Hospital marketing and public relations director Eric Prise said internal discussions around Stuart’s impending retirement have been taking place for some time. He said the process to fill the position is expected to take several months.